The harmonic minor scale is another variation of the natural minor scale. By raising the seventh note of the natural minor to a major seventh interval, this scale resolves to the tonic with more movement. However, this leaves a minor third interval between the sixth and seventh note. This openness gives the scale an exotic character. It is similar to scales used in music of the Middle East.

Like the Diatonic scale, any scale can be "harmonized" into its various modes, however the modes of the Harmonic scale are not commonly used because of their unbalanced and ambiguous harmonies. The names of the modes are rarely, if ever, referred to. Of all the modes the seventh, the Altered bb7, is perhaps the most common because it harmonizes with the diminished seventh (dim7) chord which is a popular passing chord. That is, it connects chords together. 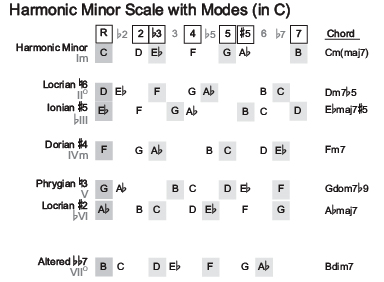