If you want to add a stronger sense of harmonic movement in your compositions, you will want to add secondary dominant chords. Dominant chords have a special tension about them that is relieved by the chord following it, usually a tonic. These chords cause the listener to anticipate the tonal center to come. In ways a dominant chord is like holding one's breath and the tonic chord is like a big exhale.

Specifically, you can create this dominant-to-tonic movement to any chord by inserting a major chord whose root is a fifth above root of the original chord.

In the above example line #1 shows a I - IIm - V chord progression. Each chord takes up one measure.

In line #2 a secondary dominant chord (A7) is inserted before the Dm7. The reason why this secondary dominant has an A as its root is because A is a fifth above D. Harmonically, going from A7 to a D chord creates a dominant-to-tonic felling even though Dm is not the tonic chord of the progression.

Line #3 has a special kind of trick that creates a mini-chord progression called backcycling. Once you insert the dominant chord, (the A7 in this case) it can be considered to be the V (five) chord of a progression that points to the a major or minor tonic chord. Thinking of the dominant chord this way, we can backcycle and insert the IIm chord in front of it. This IIm chord comes from the second scale degree of the mode that the V chord is derived from.

The diagram below will make this clearer. The complete backcycling process goes like this. "I'm playing along and I see a Dm7 chord. I decide to throw in a secondary dominant in front of it. I think to my self, what note is a fifth above D. It's A. So I get ready to play an A7. But wait, why don't I add more movement and backcycle. Ok, A7 is the V chord of D Major (and often D Minor*). Now, what's the two chord of D Major (of Minor). Em. I'll extend the chord and play an Em7. The Em7 - A7 combination is the IIm - V chord progression in the key of D Major (or Minor.)"

This is a lot to be thinking about seeing how I had only had two beats to do it in. Like most of music, you really don't think about it. You just practice it until it is automatic.

* The dominant seven chord is often substituted for the Vm that occurs in the Natural Minor scale.

When backcycling you are always looking one or two chords changes ahead and thinking what chord gets you there.

For improvisors, secondary dominants and backcycling present harmonic options that are very useful for those musical passages that have only a single chord playing. If you are fast enough, you can add these harmonic embellishments on the fly.

Below is a chart showing IIm - V7 combinations in all keys and the root of the tonic chord the V chord resolves to. Remember, the tonic chord could be either major or minor.

This backcycling technique is based on the sequence of notes as they appear on the circle of fifths. If you can visualize this wheel in your head, you'll be a backcycling wiz. 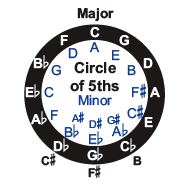 NOTE: In the example at the top of the page we backcycled to from Dm7 to Em7, however, we could continue the process further in two ways. 1) We could continue to backcycle from the A7 and insert an F#m before the Em7. This creates a IIIm-VIm-IIm-V progression in the key of D Major. 2) We could backcycle from the Em7 and insert F#m - B7 in front of it. In either case, It may not be practical to add so much movement. It may be too much of a good thing. As always, your ear is your guide.