Chords are named according to their root note and the intervals between the notes that make up the chord. Chords of a diatonic major scale fall into four types: major, minor, dominant, and diminished. Chord names also depend on what notes are in them. To understand the names, we must first know how chords are constructed.

Chord Construction
A chord is simply a group of notes sounded simultaneously. A group of three notes is called a triad. Commonly, triads are made of the first, third, and fifth notes of a scale or mode. Other notes can be added, but in the diatonic system any note added to a triad must belong to the key.

Major Chord
For example, the C major triad is made up of C, E, and G. Observe that the interval from C to E is a major third (2 steps) and the interval from E to G is a minor third (1Þ steps). This arrangement of intervals produces a major chord. When we add the seventh note of the major scale, we create a four-note chord known as a major 7th.

Even though the notes of the Lydian mode (beginning on the fourth note of the major scale) are spaced differently than the major scale, its 1st, 3rd, 5th, and 7th notes produce a major 7th chord.

The second note in the C major scale is D from which the Dorian mode is derived. When we choose the first, third, and fifth notes of this mode we get a different-sounding chord from the major. Here the interval from D to F is a minor third (1Þ steps) and the interval from F to A is a major third (2 steps). This arrangement of intervals produces a minor chord.

When we add the seventh note of the mode, we create a four-note chord known as a minor 7th.

The other modes in the diatonic scale that produce a minor chord are Phrygian and Aeolian. In the key of C major they look like this.

In the example below, the A Aeolian mode is the natural minor scale relative to C major scale.

Dominant Chord
The fifth note of a diatonic scale begins the Mixolydian mode. When we choose the 1st, 3rd, 5th notes of this mode, it produces a dominant chord. A dominant chord, whether it has three, four, or five notes, creates harmonic tension when played as part of a chord progression.

The dominant triad is simply a major chord since the distance from its root and second note is a major 3rd. However, when the 7th note of the mode is added to the chord, it produces another minor 3rd interval between the third and fourth notes. These four notes combine to produce a chord which sounds slightly dissonate. This dissonance creates tension in a piece of music which is released by moving to another chord, usually the tonic chord. This phenomenon will be discussed further in the Chord Progression Map section of this guide.

When we choose the 1st, 3rd, 5th, and 7th notes of the Mixolydian mode to create a chord, we produce a chord known as a dominant 7th.

Diminished Chord
The last note of the diatonic scale begins the Locrian mode. When we choose the 1st, 3rd, and 5th notes of this mode we produce an interesting triad known as a diminished chord. In the key of C major the Locrian mode begins on B. Here the interval between the 1st and 3rd notes is a minor third and the interval from the 3rd to the 5th is also a minor third. When we add the 7th note of the Locrian mode to the chord, the interval between the 5th and 7th notes is a major third (2 steps). This chord is sometimes called a half-diminished seventh. However, since the first interval is a minor third, it is also known as a minor seventh flat-five chord. When the chord has B in the root, it can be written Bm7b5. This chord is almost a regular minor seventh chord, except that the third note of the chord is a half-step lower than it would be normally. Below is a comparison between a minor seventh chord (m7) and a minor seventh flat-five chord (m7b5). 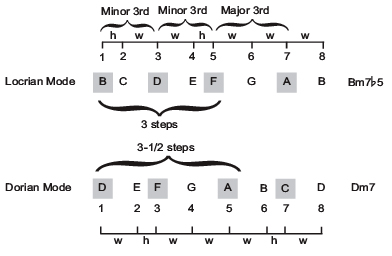 * The diminished seventh is derived from a mode whose 7th note is a whole step lower than the 7th note of the major scale. This is called a double-flatted 7th interval. It is equal to a major 6th (4-1/2 steps).