Just as the process of harmonizing the Diatonic scale produces the chords of the Major scale, this same process can be applied to exotic scales to create their chords. This process involves identifying the modes of the scale and then going about finding what chords are produced by the several intervals. The most important notes of the mode for producing chords are the first, third, fifth, and seventh. This series of intervals will produce four-note chords called seventh chords. However, triad chords can be produced by selecting the first, third, and fifth note.

Often you will hear people talk about notes and intervals very loosely. For instance, a pianist might say that he added harmony to a song by playing thirds. In this case, he is generically referring to the interval which can be either minor or major. Seventh chords can have either a major 7th interval or a minor 7th (flatted 7th) interval. This can be confusing. So, I will try to make it clear as to what interval I mean.

When you select every other note of these modes you will end up with the chords that are "diatonic" to the scale. That essentially means the chord only has notes that belong to the scale.

Harmonized Major Scale
This chart below shows the seventh chords that are diatonic to the C Major scale and the modes that come from the scale. 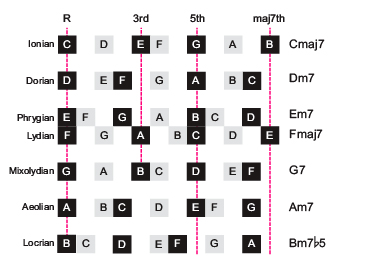 This harmonizing technique when applied to exotic scales can produce some wild sounding chords. The thing that makes the scales "exotic" is that our ears are not used to the intervals and the harmonies those intervals produce. Exotic is all relative. The cultures that these scales derive from don't think they are exotic. (For a list of exotics scales, click the link from the "Topics" page of this website).

Following the method we used for harmonizing the Major scale, we can lay out the modes of the Hungarian Minor scale as seen below. Notice that each mode begins each and every note of the scale.

Hungarian Minor Scale Harmonized
Next, when we select the first, third, and seventh (I'm speaking the way a musician might) of each mode we come up with the seventh chords that are diatonic to Harmonic Minor. Saying that the chords are diatonic does not mean they have anything to do with the Major scale. It's just a term to indicate that the chords we just came up with all belong to A Harmonic Minor, as odd as those chords might sound. 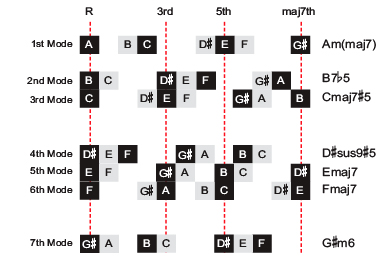 The D#sus9#5 is not a chord that you run into a lot. The third note is not even a major or minor third interval. It is actually an interval called a second. This interval is also can also be considered as a ninth. So, from these four notes we call spell an extended suspended chord with a sharp five. It doesn't sound as weird as it looks. It actually has a smooth blues feel about it. There are other chords that sound much stranger.

So, you might ask, "What do I do with this, now." I say experiment with it. Try playing the chords in a progression. It will sound odd. Not all scales are set up to harmonize like the Diatonic scale. For instance, the five chord in our example above is an Emaj7. This hardly sounds dominant and the dominant-tonic resolution we are familiar does not exist in this scale.

Often musicians will substitute chords in exotic scales to give it a workable harmony. In this scale you might use an E7 in place of the Emaj7 and the one chord (the tonic) might become Am instead of Am(maj7). As always, it depends what effect you are going for.

Exotic scales are great for creating unique sounds in composition and improvisation. However, use your ear to choose what harmonies you want to extract from them.