This section of the Harmonizer shows the comparison between the major scale and its parallel minor scale. When a natural minor scale has the same starting note as a major scale, it is said to be parallel to it.

The diagram below shows how the intervals which create a natural minor scale are derived from the major scale beginning on the sixth note. 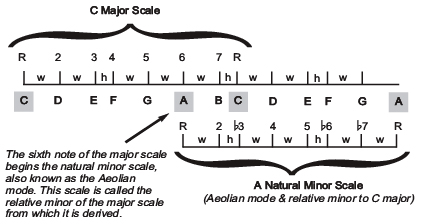 Special Note: The major keys of Db, Gb, and Cb do not have a parallel minor associated with them, at least in name. The Harmonizer will display what looks like a Db and Gb minor scale, however they are not recognize according to accepted notation practice. Conversely, the minor keys of A#, D#, and G# have no parallel among the major keys.